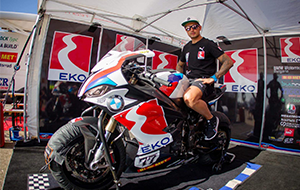 EKO Bulgaria and Martin Choy continue their successful partnership in 2021

“I feel motivated to live up to the trust of the company and defend my titles during the forthcoming season", said the leader of EKO BMW Motorrad MS77

Sofia, February 19, 2021 - EKO Bulgaria and the best Bulgarian road racing motorcyclist, Martin Choy, will continue their partnership in 2021. For an 11th consecutive year EKO Bulgaria is general sponsor of the only Bulgarian racer who has participated in the famous "24 Hours of Le Mans" competition.

Martin Choy has won 26 titles from national and international competitions. He is a multiple champion of Bulgaria and Eastern Europe, and European champion for 2011. In 2020 he successfully represented Bulgaria at the legendary "24 Hours of Le Mans" race. His excellent performance during the event secured him 12th place in the final standings of the Superstock class competition. With his success, Choy won a direct invitation to drive this year with a full program at the World Endurance Championship as part of the ENERGIE ENDURANCE 91 team.

Choy will start this year's racing season in April competing in the two rounds of the BMU European Road Racing Championship on the circuit of the Greek city of Serres. Immediately after that, he will leave for his 6th consecutive start at "24 Hours of Le Mans".

Since 2012, EKO Bulgaria and Martin Choy have also been partners in the "EKO Moto School" project. During the motorcycle school classes, the racer conducts safety and tolerance training on the road for amateur motorcyclists from all over the country.

"I am grateful to EKO Bulgaria for their support in 2021. We will be together again on the road to new championship titles. Few athletes have the honor to have such a long partnership and so many shared successes. I feel motivated to live up to the trust of EKO in the best possible way, by defending my titles during the forthcoming season", said Martin Choy.

EKO Bulgaria EAD entered the Bulgarian market in 2002. The company is a part of Hellenic Petroleum, the largest industrial and trade group in Greece, with a key role in the development of the energy sector in Southeast Europe. The successful development of EKO Bulgaria is a result of its main mission - to offer a variety of products with guaranteed quality and the best possible service. The company has a chain of 92 petrol stations under the EKO brand in the country.